“It’s not enough to be nice in life. You’ve got to have nerve.” –Georgia O’Keefe

Plaza Blanca, New Mexico is one of my all-time favorite places. It isn’t as well know as the Grand Canyon or Antelope Canyon, but in my opinion it should be. It is somewhat legendary, only because a famous artist lived nearby, and was inspired by the pale, sandstone  pillars against clear blue skies. Georgia O’Keefe’s home, Ghost Ranch, located in Abiquiu is only a few short miles away. Plaza Blanca: Link

I was 19-years-old the first time I saw Plaza Blanca, “The White Place.” Taken by someone I should not have been dating at the time and his friend (although now I feel it could have been worth it just to have found this amazing place), the swollen face of the full moon rose above the craggy ridges, her ripe form illuminating the entire canyon.

I was told the two statues at the end of this last formation below were called The Monks. He shared a story about the two silhouettes. The taller of the two monks who appears to be glowering down at the other, scolding him for straying from the monastery. If you look closely, the shorter pillar appears to be staring up at him, hands folded up in prayer like he is asking for forgiveness. I have retold this story dozens of times, as I given the tour to a select few to Plaza Blanca, and other stories shared with me that night beneath the silvery glow of the moon. This place is beautiful at any time of day, although the best time is during a full moon. The soft light illuminates the pale cliffs, columns and hoodoo structures, twisting them into the most magical beings staring back at you.

The breeze of the night whispers softly as it swirls through the tight,  winding cliff walls.

The road below is just outside of The White Place, next to the Rio Grande. As you can see, the scenery is breathtaking everywhere you look. This is New Mexico!

Some other interesting things about The White Place; Cowboys and Aliens was filmed there. Link. Photo credit from Rotten Tomatoes link. 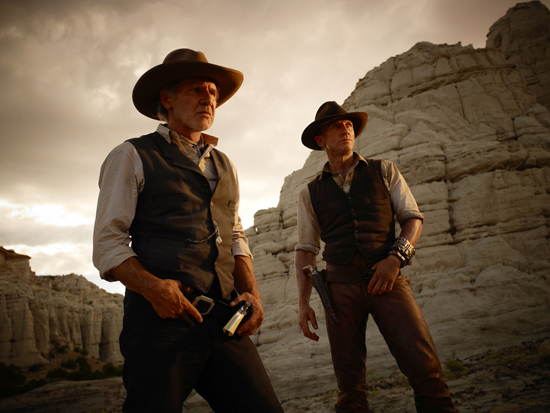 Since Georgia O’Keefe lived nearby, she hiked and camped there often, and painted the beautiful pillars in 1940, pictured below. Photo credit from: Link.

A vastly interesting, and independent woman, Georgia O’Keefe was enamoured with the terrain. She was actually the one who named Plaza Blanca, The White Place, according to one website I found. After first painting a black mesa in New Mexico she named, The Black Place, she discovered this beautiful sandstone canyon near her future home of Abiquiu, she named it, The White Place.

The photo below is of Georgia below at her ranch home, 1966, photo credit: John Loengard

It was in 1946, when her husband, Alfred Stieglitz passed away, Georgia O’Keefe moved to Abiquiu permanently.

The formations are from volcanic explosions from the Jemez mountains, depositing ash.

Of course, the one thing that always makes any experience better is having it with amazing people.

In hiking deeper into the canyon, my two friends needed to get going, but I kept stalling (I tend to do that when taking pictures of anything). I was looking up , shooting the rock walls around me, and when I looked down I saw the tarantula in the photo above very close to my foot! I squealed and decided I was finished exploring!!! This was my first and only time seeing a tarantula in the wild, and I lived in New Mexico for years.

The stacked rocks in the next three photos can be found throughout the canyon, and has always been as such. You can also find feathers stashed in the center of rock formations, hanging from trees and rocks, and even tobacco. The stone stacks are cairns, and not all are from Native American practices like you think.

If you have the opportunity to visit Plaza Blanca, take it, you won’t regret it!

Trish Eklund is the owner and creator of Abandoned, Forgotten, & Decayed, and Family Fusion Community, an online resource for blended families of all types. Abandoned Nebraska: Echoes of Our Past, Trish’s first book, is now available for pre-order. Trish’s photography has been featured on Only in Nebraska, Snapshot Nebraska, Visit Nebraska, Abando Globe, ListVerse, Grime Scene Investigators, Nature Takes Over, Raw Abandoned, and Pocket Abandoned.  Trish has an essay in in the anthology, Hey, Who’s In My House? Stepkids Speak Out by Erin Mantz.  Her writing has been featured on The Mighty,  Huffington Post Divorce,  Making Midlife Matter, The Five Moms, and Her View From Home. She has written four young adult novels and is currently working on her first adult novel.